The Power To React Quickly

Correcting course quickly when needed. This chart tells the story of a member practice within a July 2012 Medicare Shared Savings Program (MSSP) accountable care organization (ACO) as pertains to the MSSP screening for fall risk measure. A couple of months after starting the ACO the practice started following this guideline by introducing an “inreach” program – checking with each Medicare patient as they called or visited the office if they had ever had this screening and offering to complete it upon their current or upcoming visit. This led to marked improvement in performance – from 0% to 80% within 12 months. Then performance started dropping below the 80% goal set by the clinic and a “red flag” alert popped up. A quick analysis uncovered the reason for the drop: the guideline calls for repeating the procedure annually; patients who had it once started “dropping off the numerator.” The solution: the practice adjusted their “inreach” program to check the date of the patient’s last screening and recommend a repeat if needed. Remarkably, the practice was able to correct course in about 2 months as demonstrated by the trendline. 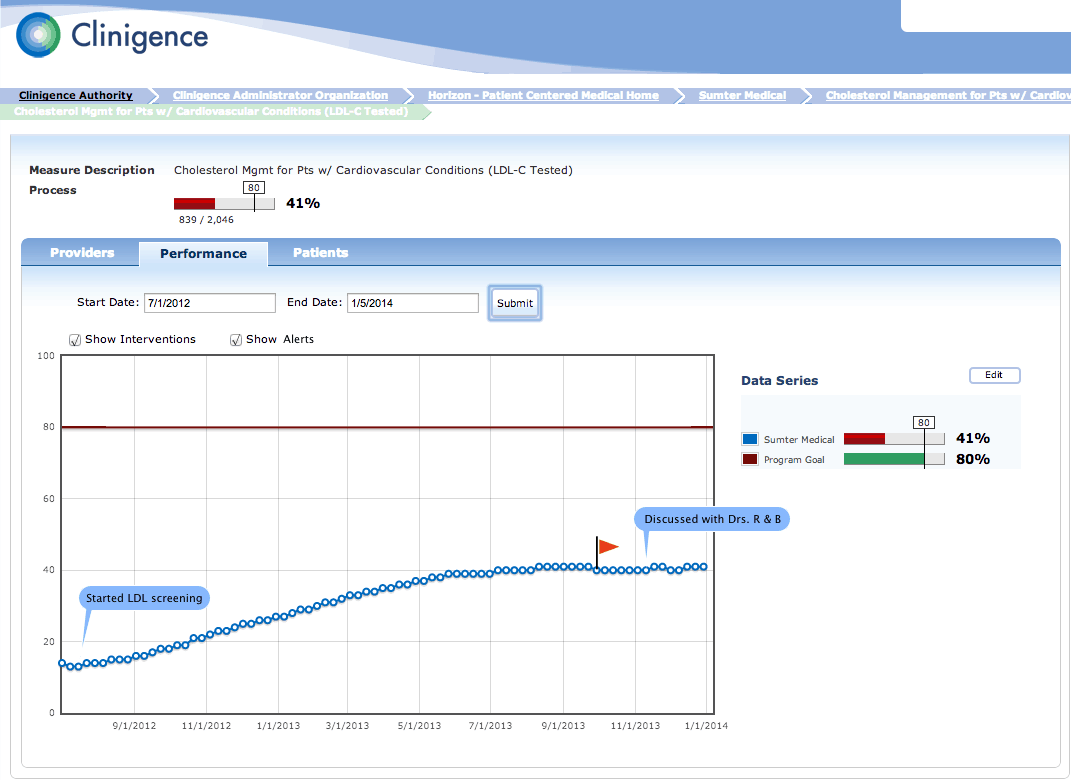 Time to intervene again. Oftentimes effective interventions produce an “S-curve” similar to the one shown here. As you can see, this practice more than doubled its compliance with the guideline (cholesterol monitoring for patients with cardiovascular conditions) over a 14-month period but failed to reach its goal of 80% compliance. A “red flag” alert was raised when the consistent upward trend flatlined for about 4 months at roughly 40%. Further analysis (not shown here) revealed substantial variations in performance among the different providers in the practice. An intervention with the low performing providers was introduced late in 2013 and the practice continues to monitor progress and asses whether this intervention is working or more interventions are needed.

Identifying role models. This report highlights the power of trending to help identify effective interventions and staff members who can provide an example to and share best practices with the rest of the organization. The light blue line shows the aggregate performance of an ACO in terms of keeping its diabetic population under control for blood pressure (the MSSP Diabates guideline.) The green line shows the ACO’s top performing physician – consistently over 90%. The dark blue line reveals a physician who managed to dramatically improve performance (from about 20% to 70% in roughly 4 months.) Even more than the top performer such physician may provide useful guidance to her peers in terms of improving their performance on this guideline.